The all purpose forum for any TR7/8 related topics.
Post Reply
18 posts

Does anyone have experience in converting the front suspension to compression strut? I like the idea of removing the roll bar location for the track control arm, and being able to build in some castor at the same time, but I'm interested in finding out if there are any negative implications of doing it (apart from race classification issues, which don't apply to me!).

Not sure how you would do that on a TR7 as the ARB locates the outer end of the TCA. You can get adjustable TCA's and strut top plates, plus coil over struts to make it adjustable in most planes Be interesting to see what you have in mind.
Alan
Saab 9-5 2.3t Vector Auto Estate Stage 1
Saab 9-3 2.0 SE Turbo Convertible
'81 TR7 DHC

Ref: TR7Compression
Compression Strut Kit to triangulate the TCA to the chassis without using the Anti-Roll bar.
Kit supplied with all parts and weld on chassis brackets. Price £235

Might be worth talking to them about their experience as they run their modifications on their own competition car.

I have an Escort kit waiting patiently to be fitted.
Life and a '76 TR7 project got in the way of fitting that 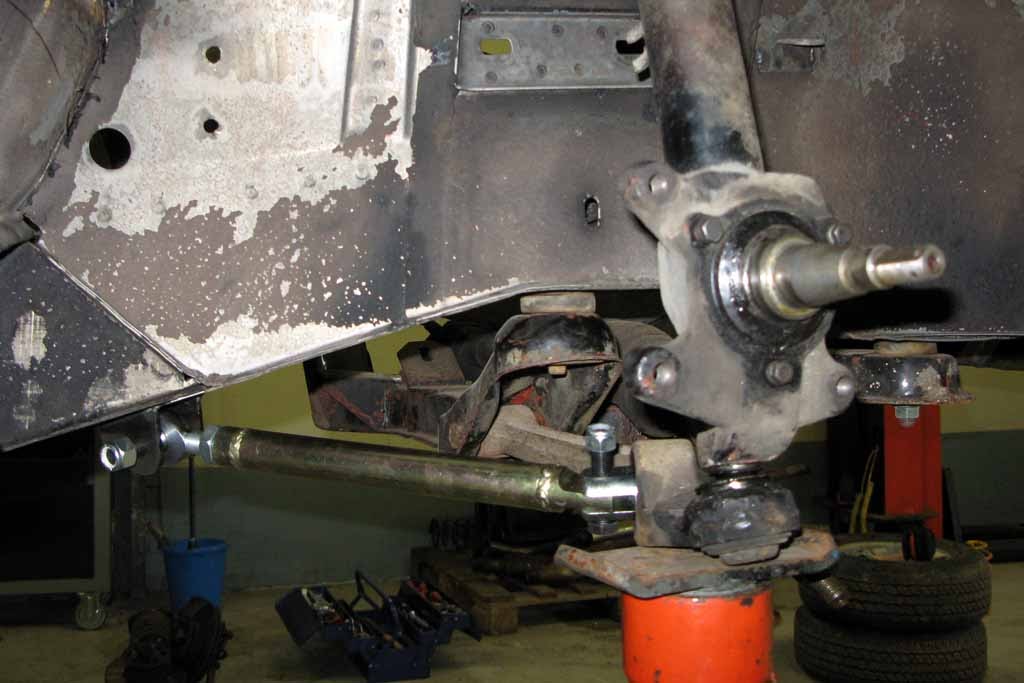 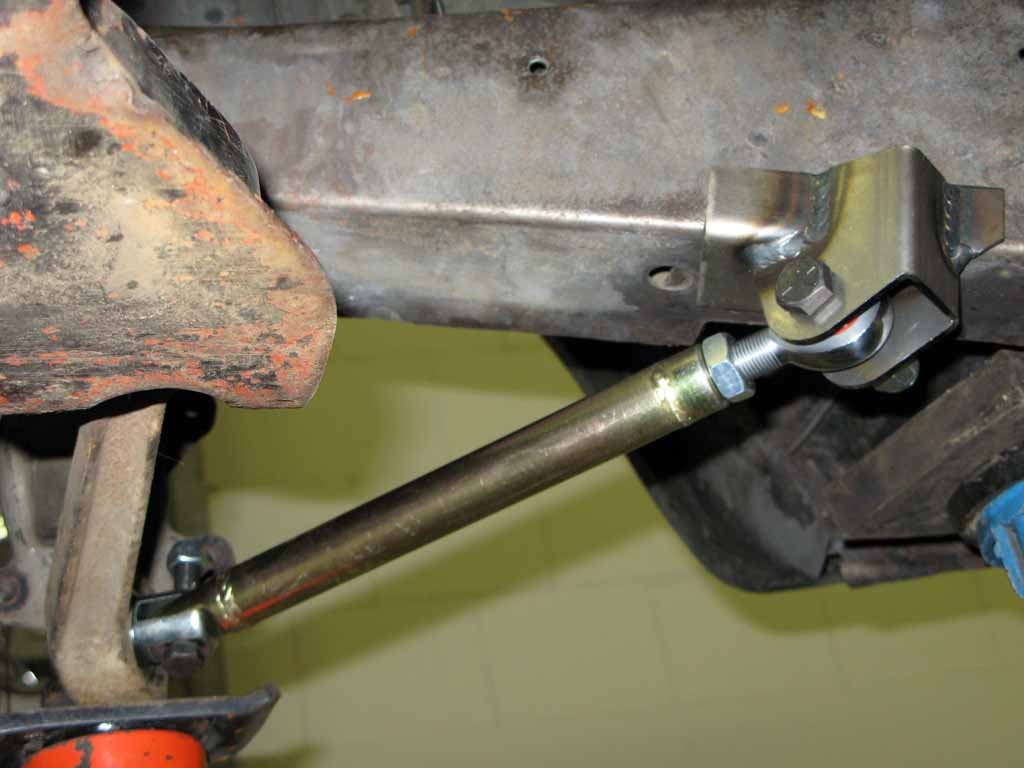 Just out of interest, with that setup do you add an ARB (with drop links or something) or run without one?
Alan
Saab 9-5 2.3t Vector Auto Estate Stage 1
Saab 9-3 2.0 SE Turbo Convertible
'81 TR7 DHC

Depends very much what you are using the car for.
With this set up you can experiment with various ARB's without changing the wheel's geometry.
But first you'll have to design a set up to fit an ARB to the front (indeed drop links or something similar)!

I learnt when racing F1 & F2 Brabhams, that the most important part of tuning a suspension is the anti roll bar. Adjusting the pick up point of the drop link of an anti roll bar by 1/2 " can move a car from mild understeer to mild oversteer. Moving one an inch can make a high performance car such as an open wheeler virtually undrivable for a mere mortal, if not a Jim Clarke.

Increasing the roll bar stiffness on my 7 by 35% made it a totally different car. Increasing castor is a poor man's way of reducing the understeer of a badly handling car in slow corners. The only time I found it had much effect on a car was when someone accidentality wound too much castor, [6 degrees instead of 3] on the front of the F1 Brabham Repco. It made little difference to the handling or cornering power of the car, but caused a very severs wheel wobble under heavy braking.

Incidentally our cars have high castor as stock.

To reduce the understeer of the 4.6L V8 powered TR8 [which tends to push the front off the road in slow corners when the power is applied] we increased the rear roll bar too much, & made the thing tail happy in faster corners. It took a lot of mucking to make much improvement on stock. The 7 with much less power was easy to improve.

Roll bars are critical to handling at higher speeds. If your planned modifications are likely to compromise your roll bar instillation, I would say don't do it. Planned together with about 30% increase in roll bar effectiveness could be a big plus.
Top

Thanks all for the replies.

It is the Hamilton Motorsport kit that I am looking at. Being on the opposite side of the world, I sent them a few questions (rather than calling), including what to do with the anti-roll bar, but have not yet heard back. My own research since then indicates to me that I would probably have to find a way of adding drop links. I'll follow up with Hamilton on this before I do anything.

Interesting point on TR7's being high castor - I was told exactly the opposite by a mob here in Adelaide. They fitted offset brackets to the anti roll bar mounts to bring it forward (Hamilton also offer these) when I had coil-overs fitted, which gave castor of about 4 degrees in conjunction with the adjustable strut tops. I'm not taking sides on this one in any respect - just noting what I have been told. The point of increasing the castor (again, as I was told!) was to help reduce the steering wheel wobble. That has worked to some extent, with no detriment to the handling (which is very good, at least to my moderate ability...).

I also read that using the roll bar to locate the TCA is essentially a weakness in the suspension design - which makes sense at least in my head, in that it lacks rigidity. So, as it's been a while since I have tinkered with the TR, it seemed like a good project...

A very good point, though, Hasbeen, that I don't want to rush into something that will be negative - although I guess it will be easy to revert if need be!
Sondar

To add some stiffness to the original set up I put a "brace" over the front ARB.
The idea was nicked from the Escort boys. 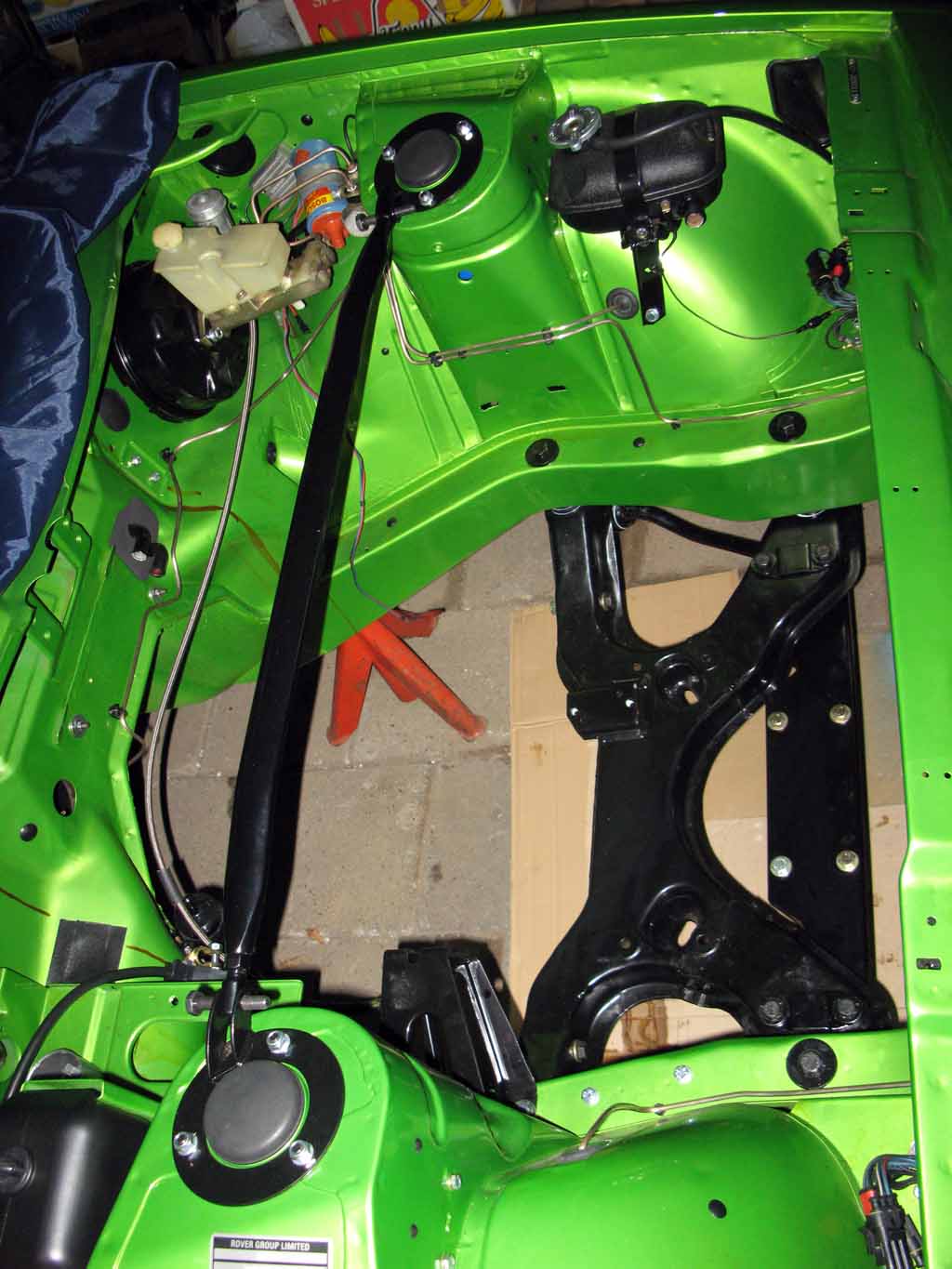 High castor should be more stable in a straight line, but turn in and agility suffers
(remember the choppers with the endless front fork in the 70's

).
It also adds (neg) camber when cornering, which sounds good.
But with more castor the steering gets much heavier! 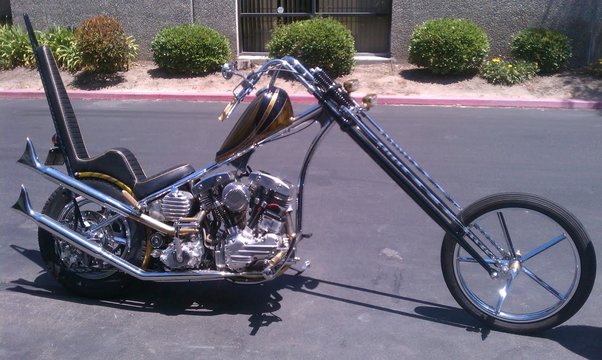 Nice strut brace, Beans. Don't think it would fit over the V8 though!
Sondar

Sondar wrote:Nice strut brace, Beans. Don't think it would fit over the V8 though!

The V8 won't be the problem, it's the fuelling that gets in the way

Hamilton Motorsport have now replied - they don't use the anti-roll bar, just increase the spring rate to compensate. They don't offer drop links, but noted that it "shouldn't be too hard to make up some brackets" if I wanted to keep the roll bar...

Increasing spring rates is fine for a tarmac competition car, but I'm not sure it's a great idea on a road car - too much compromise on the ride quality perhaps.

Which leaves the drop link idea, although Hasbeen's comments on placement of the drop link could make that an interesting exercise! My thought would be to run it as close as possible to the original mounting point on the TCA.

Needs more consideration before I dive in. Thoughts anyone?
Sondar

If you are going racing, & the tracks are near billiard table smooth, there is not much wrong with the stiff springs approach. However for general road work, on average roads, it is a very poor way to go. A little story about roll bars.

In the late 60s in Oz we had 3 categories of serious open wheeler racing, plus Formula Ford & Formula V as training categories. We stayed with the previous world championship 2.5L for our F1, when Europe went to 3.0L. Superseded cars came cheaper. We had our Formula 2, which was really a rewrite of your Formula Junior, 11cc engines from a homologated road car, with much tuning, & Australian Formula 1,5, basically current world F2 with 1.5L engines, basically the Cosworth 1.5 twin cam.

My F2 in 1967 was the oldest Brabham still in one piece, being FJ 3 62. I bought it without an engine. A mate & I upgraded it to close to 1965 standard, & built an 1100cc Ford Anglia/Cosworth engine for it. It had all the good forged bottom end, with an Anglia block & head bought from a wreckers & developed by us. We made our own manifolds very similar to the Cosworth stuff, & had a locally developed cam.

On the dino I had similar power to the best Cosworth 1100cc engines, with it coming in just a little lower in the rev range. We were more than chuffed by that. In it's first race at Warwick Farm, a premier circuit I broke the 5 year existing lap record in the first race, & the top driver in the category broke it by a little more in the next. We had done a lot of work on the suspension, & it was running softer springs, but stiffer roll bars. A little under 2 years later I had knocked 6 seconds off that record.

But this is a story about Bathurst & roll bars. Bathurst was getting very rough by this time. I was getting cracks in the front fenders of my Morgan +4 from the bolt hole fastening them to the stay from the front subframe each time I raced there. Knowing this for the 66 F1 feature race to which I was lucky enough to be invited, I softened the springs even more, by about 12%, & stiffened the roll bar settings.

The field was about half F1s of varying age plus mostly ANF 1.5s & a 3 of us tiddlers to make up the numbers. People were amazed at my cars performance. I could drive around some of the ageing Brabham Climax on the faster corners. I made the third row of the grid. Even better I finished 3Rd outright.

Amazingly I repeated this the next year 1967, again taking 3Rd outright in my little 1100cc Brabham.

The next year I had won an F1 drive in a Brabham Repco. Repco being the engine builders using specially cast for them, Rover V8 blocks. They won 2 world championships for Jack, & supplied some 2.5L versions for us in Oz. I convinced the owners top soften the spring rates in that car, & won the race. I was a bit lucky. The stiffer spring rates on the car of the driver who probably would have beaten me caused the top of a rear upright to break off just above the axel bearing.

The 4.6L Tr8 had 200Lb springs when we bought it. I changed them to 140Lb springs, not being game to go any softer. My son likes it that way, so I have left it. It does not handle as well as the Tr7, which has the original springs, on our Oz country roads. I had them retempered to full factory rating when I had the 30% stiffer roll bars made, while building the car. It easily out handles the 8, but to be fair, the 8 is a drop head, which probably reduces it's cornering ability as much as the stiffer springs.

Hope you find this useful.

Users browsing this forum: No registered users and 47 guests